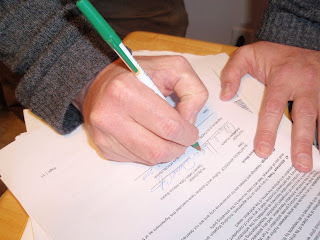 We finished up Glengarry, Glen Ross today, and overall, it seemed the students did not find it quite as harrowing as three hundred pages of Humbert Humbert's manipulations and madness or the ten to twelve of Dorothy Allison's "River of Names." Raymond Carver's "Cathedral" was one they could see as having the feel-good ending they crave. Next up, Chris Offutt's The Same River Twice.
at February 24, 2010 No comments: Links to this post

Before you have a good weekend, don't forget to take your vitamins, drink your water, and of course, read your indie novels.
at February 19, 2010 No comments: Links to this post

If you find yourself yearning for some poetry and discussion from Lamont B. Steptoe, I discovered you can google "lamont steptoe" and get plenty of entries for this American Book Award winner. Here's a nifty interview from 2007.

Lamont currently keeps watch over what was the Southwestern edge of University City (until the realtors and migrants decided UC should extend to 52nd Street or so), and you can find him on the 34 line, the 42 bus, the walking path, bicycle, or by other means heading West after a day in center city.

Here is what amazon can offer if you'd like to read his poems.

I suspect that getting in touch with Lamont is the best way to access his most recent work. If you see Lamont in person, and are interested in travel narrative, I am certain he can deliver.

shelve your indy novel in the superbookstore month

Yes, it is true. February is national "Shelve Your Indy Novel in the Superbookstore" month. This means that sneaking into a local big-box store known for housing book product and in clandestine fashion placing your independently produced novel on the shelf, with sticker price affixed, is the thing to do. No dark glasses, trenchcoat, or other disguise is required; a hidden camera might make things more interesting, but of course, the store most likely already provides those. Alphabetical order is expected, but the organizers of this month's theme have not yet arranged to check up on folks. I'm assuming this means it can also be "Pretend Your Last Name Begins with a Q Even if it Begins with an X" month.

Reminder: It is absolutely NOT national "Sneak Strong Coffee for Free in the Superbookstore Cafe" month, and as per usual, shoplifters will be prosecuted to the fullest extent of the law.

If you are interested in joining Daniel D. Peaceman's bi- and even trilingual literary project, this blog entry includes submission guidelines:

He requires stories, poems, essays, book reviews, art, photos, and more for both the print (paper) publication as well as the journal's online presence. I recommend you email him at the stated yahoo address before you submit.
at February 07, 2010 No comments: Links to this post

It looks like I am soon to receive my paper copy of the January/February 2010 issue of the Romanian journal Contemporary Horizons (or, in Romanian, Orizont Literar Contemporan). The line up is diverse and from several continents; I think I see my Kafkas cozying up to contributions from India and Spain:

From perusing the previous issue, which includes 6 poems by Don Riggs, we can see that Daniel D. Peaceman and his colleagues do a tremendous amount of work to prepare this bi- and even trilingual publication. (All of the contributions are in both English and Romanian and some are represented in three languages.)

Be well, Daniel Dragomirescu.
at February 05, 2010 No comments: Links to this post

Dan Kalder has an interesting piece on recent church burnings in Texas. He connects them to some Heavy Metal "Back to Thor" kids from Scandinavia from the 1990s: http://whenfallsthecoliseum.com/2010/02/04/burn-baby-burn-churches-go-up-in-flames-down-in-texas/.

I'm guessing the churches with better financial support in Texas already had smoke alarms, sprinklers, and the good security that money can provide... I just can't help but picture these arsons as also a crime against the poorer people of the region, people perhaps with little more than a warm seat in church.

I could be way off here, but I can't help but imagine the kind of church built from scratch by Robert Duvall in The Apostle, which to my mind is just about as good as it can get if you want religious themes with your overpriced popcorn and cola.

Well, I'm sure just the fact that I wrote this proves beyond a doubt I'm some odd but hopeful agnostic who snuck into the Chick-Fil-A tonight and enjoyed the ambiance and a good family meal. I miss the 1970s and my father's Shake 'n Bake--disco or Cat Stevens in the background, take your pick--but I must say the Christians down here do chicken right.

More than one really nice South Carolinian has told me with an admiring glow that Chick-Fil-A is debt free. Is the golden chicken rule about living within one's means???

Where is our Allen Ginsberg poem on chicken??? I'm guessing it's called "Chicken Night," but in China, they'd understand AG prefers the duck.

After my last class last Friday, a student approached the desk. Rather than discuss a paper topic or grade, he wanted to discuss Salinger's death. I hadn't mentioned it in class, so this alone made me happy.

Over the weekend and through today, I had a chance to read various obituaries--from The Washington Post and New York Times and other papers. Like you perhaps, I particularly enjoyed the Times article on the less reclusive life that "Jerry" enjoyed in Corning, New Hampshire, including the fact that the town folk enjoyed helping J.D. avoid the tourists by giving bad directions.

I got to thinking about when and if I'd ever assigned Catcher in the Rye, and from what I recall the only time I did was in an American Literature survey course I taught for a satelleite campus of a university with central headquarters in Illinois. The classroom was in the basement of a hospital near Broad and Girard in North Philadelphia, and the students were 6 middle-aged nurses looking to complete a bachelors degree.

How or why Instructor Kudera chose Salinger for this crowd is unclear, but to a person, these women found the narrator to be a spoiled rich kid who complained too much. They couldn't believe anyone would dare whine so much as our dear, dissident Holden. If I'm not mistaken, my enthusiasm carried me an hour into the 3-hour night class before I recognized they disliked our hero. From there, I grew cautious, switched David Bradley's The Chaneysville Incident to Toni Morrison's Sula and was relieved when the semester came to an end.

(The Bradley would have also been a first assigning for me, but it's long and dense and who knows what my overworked African American adult students would have thought about the bitter black male protagonist living with a white woman he seems to treat so poorly at times?)

So there you have it. Holden Caulfield has a special place in the heart of millions--not only English teachers and majors and writers but all kinds of kids who may or may not be "readers" and of course, famously, even a serial killer or assassin here and there. But to exhausted women pursuing the full four-year degree after half an adult life spent cleaning up blood and urine, Holden was a spoiled brat.

God bless you and your literature, Salinger, and of course, may you rest in peace.