We biographers have always done our work amid a loud chorus of negativity. Oscar Wilde famously observed that biography "lends to death a new terror." Joyce feared "biografiends." Nabokov, too, derided the biographer's efforts: "I hate tampering with the precious lives of great writers and I hate Tom-peeping over the fence of those lives--I hate the vulgarity of human interest." Then there was George Eliot, who asked, "Is it not odious that as soon as a man is dead his desk is raked, and every insignificant memorandum which he never meant for the public is printed for the gossiping amusement of people too idle to read his book?"

Even members of the profession disparage it. Edmund White, the biographer of Jean Genet, called biography the revenge of the little people on the big people. And Michael Holroyd, after a lifetime of helping to elevate the form, has decided that biographers are "parasites. . . intent on reducing all that is imaginative, all that is creative in literature, to pedestrian autobiography." We compete with our subjects, he contends in "Two Cheers for Biography," writing big bulky books that overshadow their beautifully crafted masterpieces. We trade on their fame.
at July 31, 2018 No comments: Links to this post

Email ThisBlogThis!Share to TwitterShare to FacebookShare to Pinterest
Labels: James Atlas, The Shadow in the Garden

more from the Atlas

I had been twenty-four when I embarked on Delmore; I was forty when I began Bellow. The young biographer had been thrilled to interview the distinguished Partisan Review intellectuals Irving Howe and Clement Greenberg. But on my second tour. . . I felt a little sheepish. Not him again, they must have thought. The slight, eager youth with his oblong reporter's notebook had metamorphosed into a weary middle-aged writer. Not them again.
at July 29, 2018 No comments: Links to this post

We interrupt this literature for memories of Don "Sauce" Cain

Only a few days ago, Ultimate college champion, Maximum Time Aloft record-holder, and all-around great guy Donald "Sauce" Cain passed on too young at age 62. Here's a ten-minute clip of Don talking about his Ultimate Frisbee past, including a detailed account of his world-setting MTA throw. On Facebook, I'd reminisced earlier:

I've barely touched a disc in over ten years, but early in this decade, I ran into Sauce, out of the blue, in a restaurant on Folly Beach or another beach near Charleston in South Carolina. That was great. . . [to see] a friendly face 500 miles from Edgely Field. Another fun memory I have is getting destroyed by this "It's a Nimeo" team when I was in college. We were playing in a club tournament, and a "Nimeo" was when a hammer or blade went right over our heads; this was years before those were more common throws. It wasn't until years after college, talking with Don fifteen years later at Edgely that we figured out he must have been on that team. 62 is too young. R.I.P.

PADA has an obituary, and Facebook also has wonderful memories on Don's wall as well as classic photographs from his early teammate and local legend Chris O'Connor.
at July 27, 2018 No comments: Links to this post

a footnote from the Atlas

* More than forty years on, I could tell you the brand of cigarette that my intellectual heroes smoked: Clement Greenberg, unfiltered Camels; Harold Rosenberg, Pall Malls, Lowell, the short-lived Trues. It's hard to recall now, as cigarettes are being phased out of American life--some brands no longer exist--and smoking is often seen as a marker of mental illness, that in those days almost everyone smoked.

This tangent reminds me of my family lore, that my mother's father died from "smoking unfiltered Camels and eating red meat late at night." Certainly it's true, I've taught entire sections of college English in which there is hardly a smoker in the room, yet the habit may remain more pervasive than we realize. Although the N + 1 and Jacobin intellectuals may have traded in their daily pack for exercise machines, there are still plenty of smokers around. We find them outside of campus buildings and bars, or in designated smoking areas. Go abroad, and you can see the habit remains much more pervasive, or at least, there are fewer restrictions as to where one might partake. At current prices in the U.S., it's amazing to think how much smokers could save if they could quit. Anyway, if you're interested in 20th-century literature and the biographies of writers, I highly recommend James Atlas's book.
at July 27, 2018 No comments: Links to this post

I'm a hundred pages into James Atlas's The Shadow in the Garden, his memoir about his life writing biography, and I'm greatly enjoying it. Although his principle subjects, Delmore Schwartz and Saul Bellow, figure prominently, there is so much more on various writers, biographers, and writer-biographers. Some of the footnotes are extremely detailed or hilarious as well. Thomas Carlyle, Virginia Woolf, Alfred Kazin, Samuel Johnson, and Jean Stafford are only a handful of  writers who are included in the narrative. The recurring theme of writers dying isolated in cramped apartments would make Cyrus Duffleman proud.
at July 24, 2018 No comments: Links to this post

I recommend Ken Ilgunas's two travel narratives Walden on Wheels and Trespassing Across America. Both have strong elements of memoir, often self-reflective comedy, and heartfelt views of what we are doing to the planet as well as each other and why we might want to change our ways. Partly because they are interesting books and partly because I so rarely read three books by the same author within a couple months, I may try to interview Ilgunas about these two along with his more polemical This Land is Our Land although I'm momentarily so deep in the weeds with my own problems and concerns that for now this blog is the best I can do on Ken's behalf. Please see Goodreads for my other recent reads.
at July 21, 2018 No comments: Links to this post

Email ThisBlogThis!Share to TwitterShare to FacebookShare to Pinterest
Labels: Ken Ilgunas, memoir, This Land is Our Land, travel narrative, Trespassing Across America, Walden on Wheels

László Krasznahorkai, The Art of Fiction No. 240

"Because they couldn't publish their own work under the Communist regime, the greatest writers and poets became translators. That's why we had wonderful translations of Shakespeare, Dante, Homer, and of every great American writer from Faulkner onward. The first translation of Pynchon's Gravity's Rainbow was really marvelous." 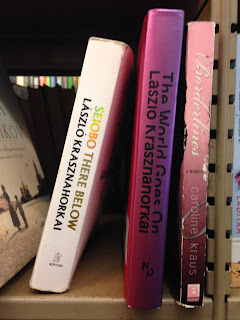 On my way to tweeting "The Bicentennial with Grandpa Andy," I came across an excerpt from Auggie's Revenge.

Roses Are Red and We Run Bad

New indie fiction titles We Run Bad and Roses are Red, Violets are stealing loose change from my pockets while I sleep are out and about.
at July 01, 2018 No comments: Links to this post