On Friday from noon to 2 p.m., I'll be signing copies of Auggie's Revenge and the Classroom Edition of Fight for Your Long Day at the College English Association Conference Book Exhibition.
at March 31, 2017 No comments:

On Writing The Original Adjunct Novel:

A Discussion of Contingent Faculty Issues with Alex Kudera

Alex Kudera's Fight For Your Long Day (Atticus Books) was drafted in a walk-in closet during a summer in Seoul, South Korea and subsequently won the 2011 IPPY Gold Medal for Best Fiction from the Mid-Atlantic Region. It is an academic tragicomedy told from the perspective of an adjunct instructor, and reviews and interviews can be found online at The Chronicle of Higher Education, The Philadelphia Inquirer, Psychology Today, Inside Higher Ed, Academe, The Southeast Review, and other locations. His second novel, Auggie's Revenge (Beating Windward Press), and a Classroom Edition of Fight for Your Long Day (Hard Ball Press) were published in 2016. Kudera's other publications include the e-singles Frade Killed Ellen (Dutch Kills Press), The Betrayal of Times of Peace and Prosperity (Gone Dog Press), and Turquoise Truck (Mendicant Bookworks). Alex has taught college writing and literature classes since 1996, and he currently teaches at Cincinnati State Technical and Community College.

“Because, yes, if he can reach Frank before he disappears, if he can hang on and finish up the shift the right way, if he can wake up tomorrow, not hit the snooze button, make the coffee, hop in the shower, remember to shave, get off his ass in a timely fashion, he’ll have the chance again, yes, on a shorter day even, to teach his classes all over again. Yes, all over town in an encore performance, Adjunct Duffleman rises to the occasion in the age of terror, a lone soldier of the subway, bus, and elevated line and a failure of many in God knows how many ways. And yet from the bottom of his heart, he wants to believe that the outcome remains possible that for some student from his past, or perhaps one on the way, Cyrus Duffleman, educator, could make the difference. Yes, if he could reach Frank now.”

~~ from Fight for Your Long Day 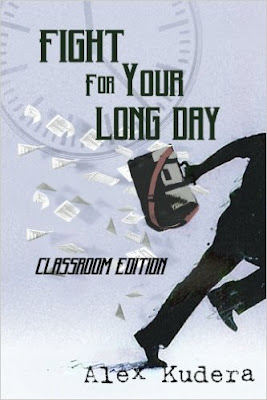 I'm reading Bukowski's On Writing and am loving learning or being reminded that his favorite books were amazingly great books--Knut Hamsun's Hunger, Celine's Journey to the End of the Night, John Fante's Ask the Dust, Sherwood Anderson's Winesburg, Ohio, and D.'s Crime and Punishment.
at March 08, 2017 No comments:

Bukowski on the little press life. . .

. . . yes, the "littles" are an irresponsible bunch (most of them) guided by young men, eager with the college flush, actually hoping to cut a buck from the thing, starting with fiery ideals and large ideas, long explanatory rejection slips, and dwindling down, finally, to letting the manuscripts stack behind the sofa or in the closet, some of them lost forever and never answered, and finally putting out a tacked-together, hacked-together poor selection of typographically botched poems before getting married and disappearing from the scene with some comment like "lack of support." Lack of support? Who in the hell are they to get it? What have they done but camouflage themselves behind the facade of Art, think up the name of a magazine, get it listed and wait for submissions from the same 2 or 3 hundred tired names that seem to think they are the poets of America because some 22 year-old jackass with a bongo drum and a loose 50 dollar bill accepts their worst poetry.

~~ from On Writing by Charles Bukowski

At the College English Association conference, I plan to read short passages from both Auggie's Revenge and the Classroom Edition of Fight for Your Long Day.
at March 02, 2017 No comments: