I'm excited that my previously published e-book single The Betrayal of Times of Peace and Prosperity (35 pages of undergrad commencement angst, more or less) was set to free this morning and is back in the Kindle Store Top 20 in two literary fiction categories. . . humor and short stories. For that one, on amazon, I didn't solicit any of the reviews, but the three who read for free gave it five stars and called it a "masterpiece," etc. whereas the guy who paid a dollar said it was "pretentious" and disliked everything about it. . . hopefully, he's found reading more pleasurable since then.
at January 29, 2015 No comments: Links to this post

I'm excited to announce that in addition to published paperbacks of Over Fifty Billion Kafkas Served and Auggie's Revenge, I'll also have "Turquoise Truck," a car-lot story, published as a stand-alone e-book at Mendicant Bookworks by summer of 2015. Mendicant is known for gritty realism and has published Gerald Locklin, Mark SaFranko, Ben Tanzer, and other small-press stars in the past. This will be my second foray into the world of e-book singles; my first was a short novella (or long story), The Betrayal of Times of Peace and Prosperity.
at January 25, 2015 No comments: Links to this post

Lying on my couch at an uncommon angle, I looked up at a shelf with a small selection of paperback fiction and saw these ten titles in order: Lorrie Moore's Anagrams, Toni Morrison's Beloved and Sula, Murakami's Hard Boiled Wonderland at the End of the World, Arthur Nersesian﻿'s The Fuck Up and Chinese Takeout, Chris Offutt's Out of the Woods, Yuri Olesha's Envy, Pynchon's V, and Roth's The Human Stain.

I have so many books in storage and in piles on the floor or shelves in other rooms, yet, possibly, these ten represent in exacting proportion all the fiction I read. Having said that, I soon realize that 30% women might be high, sadly enough, and 20% in translation is low, I think, and it would be weighted more toward fiction from Europe and Russia, not 50/50 between Europe/Russia and Asia. Also, because I anticipated teaching contemporary literature, after 1945, when I drove down to South Carolina, I left most of my titles written before World War II in storage space in Philadelphia.

I do have the white whale and friends, Pierre, etc. on hand, at least a couple of the same Penguin paperback editions I read in college. Of the ten I just named, only Olesha's Envy is one I was assigned to read as an undergrad, but the copy on the shelf is one I procured years later. The British Picador paperback V is one of two editions I've owned, and I bought it in England when I was working as a busboy in Paris and then traveling in Europe the summer and autumn before the Berlin Wall fell. The Crying of Lot 49 rests on a different shelf where I keep the books I've been teaching most recently.

What's on the shelf above the first ten, you ask?

Ha Jin's Waiting, Denis Johnson's Angels and Jesus' Son, Edward P. Jones's Lost in the City, two different editions of James Joyce's Portrait of the Artist as a Young Man, and then four Kafka Schocken Classics w/Dad's Kunderas leaning against them. Kerouac's On the Road rests horizontally on top the paperbacks just named.

When Over Fifty Billion Kafkas Served, my bilingual stack of stories, arrives from Romania, I'll let the copy I keep rest in its alphabetical place, between Kafka and Kundera, on the higher plane of shelf.

maybe i should be anti-Gardner since i'm in w/the #Pynchon crowd & am known to dig caricature, distrust too serious http://t.co/r6f6A2ILAk
— Alex Kudera (@kudera) January 12, 2015

on the other hand John Gardner's Mickelsson's Ghosts got me back into writing fiction, would sit on Friday afternoons in Van Pelt, comfy 1/2
— Alex Kudera (@kudera) January 12, 2015

returned the book to the shelf every single time, always read from same book although there was another exactly like it up there in stacks
— Alex Kudera (@kudera) January 12, 2015

bought a used IBM ThinkPad to bring to Korea, once there wrote the whole thing from late June to early August, mainly lined paper in COEX
— Alex Kudera (@kudera) January 12, 2015

shopping mall corner Starbucks and then typing in, improving in evenings and mornings. did not grade papers that summer. Gardner was right!
— Alex Kudera (@kudera) January 12, 2015

so now Fight for Your Long Day is up there on the 3rd floor of Van Pelt w/ the 2 copies of Mickelsson's Ghosts; somewhat unbelievable to me.
— Alex Kudera (@kudera) January 12, 2015

i think you can still get into UPenn's Van Pelt library with a driver's license, as i would, although they take your photo at the entrance.
— Alex Kudera (@kudera) January 12, 2015

Daniel Dragomirescu of Contemporary Literary Horizon sent me this poem:

I don’t see him, and I know he has shrunk,

he has a family of brothers burned to ashes
in Poland,

he never saw them, he learned of the death of
his mother by telegram,

he didn’t inherit even a single button from his father,

what do I know if he inherited his character.

My father, who was a tailor and a Communist,

my father who didn’t speak and sat on the
terrace,

to not believe in God,

to not want anything more to do with men,

sullenly withdrawing into himself against Hitler, against Stalin,

my father who once a year would raise a glass
of whisky,

the day the Reds entered his village

and made my grandfather dance like a
bear on the Sabbath,

and made him light a cigarette and smoke it
on a Sabbath,

and my father left the village for ever,

went away for ever muttering his anger against
the October revolution,

for ever hammering home that Trotsky was a
dreamer and Beria a criminal,

abominating books he sat down on the
terrace a tiny speck of a man,

and told me that the dreams of men are
nothing more than a
false literature,

that the history books lie because paper
can take anything.

My father who was a tailor and a Communist.

*When I followed the Jose Kozer link above, I noticed that he is the age my father would be (b. 1940), and both had immigrant parents from Czechoslovakia.
at January 11, 2015 1 comment: Links to this post

And, finally, near the end of Journey, Celine arrives at his Slovak beauty, a far cry from the meth-infested psychotic "no-neck Slovak" of Robert Stone's "Helping":

Quite a few fine-looking girls applied for the job. In fact, so many strapping young women of all nationalities flocked to Vigny as soon as our ad appeared that we were hard put to it to choose among them. In the end we picked a Slovak by the name of Sophie whose complexion, energetic yet gentle bearing, and divine good health struck us, I have to admit, as irresistible.

In my imagined, or real, life of a Czech Kudera passing as a Slovak Soska (my father's father's true last name), my first literary sighting of any characters from the old country was late in high school and concerned the Czech girls on the American plains of Willa Cather's My Antonia, a book I remember enjoying very much. And, of course, Stone's "Helping" remains a favorite story nevertheless or because of its Slovak grace and wit.

As is our habit at L.U.S.K., we'll leave it to the next blogger to deconstruct the false binarism between the essential Slovak and constructed Czech in every man, neck or no.
at January 08, 2015 No comments: Links to this post

portrait of celine with frozen penny 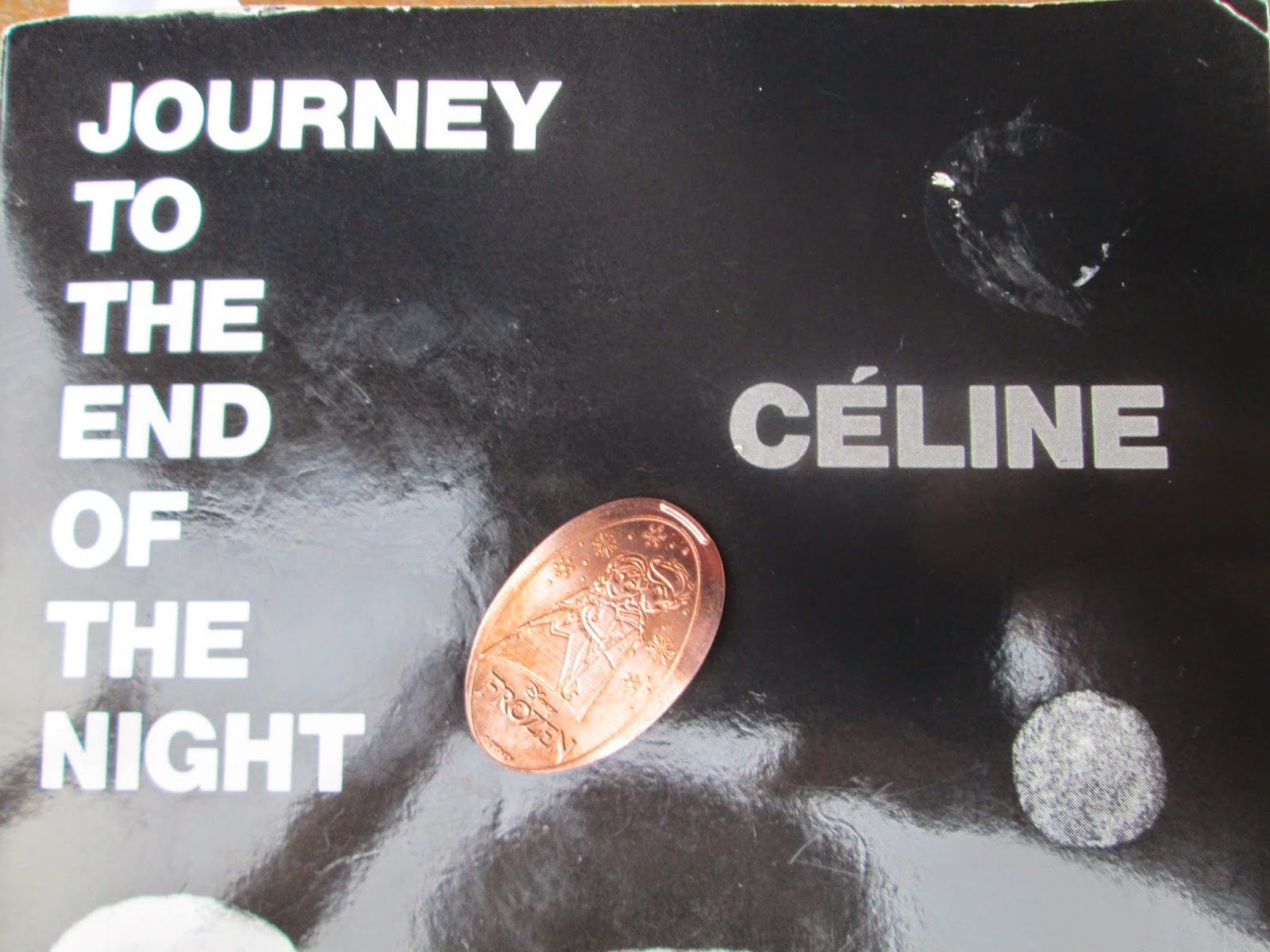 Email ThisBlogThis!Share to TwitterShare to FacebookShare to Pinterest
Labels: Celine, compare and contrast, Frozen, Journey to the end of the night

Celine on people from our past

"He went on talking to me in the darkness, while I retraced the steps of my past with the sound of his voice as a charm with which to open the doors of the years and months and finally of my days, wondering where I could have run into this man. But I found nothing. No answer. You can lose your way groping among the shadows of the past. It's frightening how many people and things there are in a man's past that have stopped moving. The living people we've lost in the crypts of time sleep so soundly side by side with the dead that the same darkness envelops them all."

Email ThisBlogThis!Share to TwitterShare to FacebookShare to Pinterest
Labels: Celine, French literature, Journey to the end of the night, people, the dead, the past
Newer Posts Older Posts Home
Subscribe to: Posts (Atom)