The dreams disappear and the music stays, but server and barista demand too much time and more effort at emotion than any job pays, and then you busk and strum and cash comes and goes and you leave town and live with your sister and her man and kids and it’s too crowded with family noise. So with acoustical guitar and green canvas sack, you find yourself in your forties on a bus to nowhere, Minnesota, to meet a nowhere man in late autumn chill. It’s a black-girl booty run to a white boy broken and broke. He’s got nothing but small panes in a tiny studio and he dies every day as a recovering artist and addict and no music gets played and no gigs get staged and the slab of steak you fry just for him gets thrown at the wall of the shower stall. Staring out at his old junk and used table and chairs, you wonder why no rusty needles are stuck in the torn pillows of his faded couch. Or under the beaten rug or behind the barren loveseat where his tantrums pour out quick like wine from his bottle, and you know no one is recovering from nothing and the sex is no thrills or never save for one special time when you wait for him all day long in a lavender bath robe and silvery thong. He comes home from his whiskey and beer and mid-life rage and you lower him down on the queen-sized futon and spend too many minutes touching and pointing as he just lies there, a moan and a sigh, and then he groans too loud and softens too soon and that’s the saddest sound of your world getting colder.
at November 30, 2013 No comments: Links to this post

thankful for a five-star review

Of course, I could, and would, complain, but aside from the usual, I'm thankful for this new, unsolicited review that I discovered earlier this week for my college commencement story. If you prefer reading for free to shopping at discount, you're welcome to check it out anywhere e-books or downloaded or right off the screen at smashwords.


1 of 1 people found the following review helpful
5.0 out of 5 stars Is This All There Is? November 25, 2013
By BirdieTracy
Format:Kindle Edition|Amazon Verified Purchase
When I started reading this story I groaned. Was this going to be another tale of collegiate pothead paradise? I am sincerely glad I kept reading. As I read I became convinced that not only did the author attend college, but he has had time to mature and synthesize his experience.

The story centers around a young man who is just about to graduate. As he walks around campus he encounters a wide variety of students. The earnest protesters of the current flavor of evil, those who want to stick it to the man- as long as they don't get caught and other assorted wildlife. It is to be a day of pocket epiphanies.

If I sound dismissive then let me assure you that I am not. College students walk the razor thin line between childhood's final end and adulthood. For the most part, the only ones unconcerned about what comes next are those who already have an in somewhere (and I would imagine that even they are sweating bullets). There is an overwhelming feeling of "is this it?"

The author does a tremendous job of pulling all of this together. And I have to thank him for briefly putting me "back in the day."
at November 29, 2013 No comments: Links to this post

Email ThisBlogThis!Share to TwitterShare to FacebookShare to Pinterest
Labels: The Betrayal of Times of Peace and Prosperity

I started Cartilage and Skin in 1998.  When I went to South Carolina in 2004, I had a complete draft, which was roughly 180 pages longer than the current 324 pages.  As I worked on my PhD, I didn’t really think about my book.  Sometimes during that period, I would open to random pages and tinker with the language.  In 2006, I added a sentence about Horatio Alger; in 2009, I added a sentence about “rhizomatically-inclined sophists.” That was the last sentence I added.  In the spring and summer 2010, after I finished my dissertation, I cut out the 180 pages (which, as I mentioned, dealt with his youth) and moved some things around.

Read more at When Falls the Coliseum.
at November 26, 2013 No comments: Links to this post

Congratulations to Michael James Rizza on this past week's release of his award-winning debut novel, Cartilage and Skin. Over at When Falls the Coliseum, in response to my interview questions, Dr. Mike interweaves thoughts about Martin Luther, Karl Marx, male prostitution, the "masculine imagination," and much more that that.

Be sure to check out the interview, and then buy the book.

what really happens to anyone?

"Tuition is $31,385 a year; meanwhile, Kovalik said Vojtko earned less than $25,000 from teaching eight classes a year. And though Vojtko had worked at the university for 25 years, when she was let go, she wasn’t entitled to severance pay, let alone a pension. Her situation seemed to embody everything that is wrong with the economics of higher education."

Read more of this article from Slate.
at November 21, 2013 No comments: Links to this post

In under eight minutes, Alex Marcus reads a passage from Fight for Your Long Day.
at November 20, 2013 No comments: Links to this post

"A global trade-policy shift in 2005 allowed Chinese factories to flood the U.S. market with hats made by workers paid a fraction of the $15-an-hour average wage Bollman's nonunion workers received. The Adamstown factory had made many inexpensive store-brand hats sold by discount retailers.

"Bollman lost a $4 million Walmart account to the Chinese. Others followed.

"The dropping of trade quotas proved devastating. Domestic hat manufacturing had held about 20 percent of the U.S. market prior to that. Today, it is 5 percent, said Nate Herman, vice president of international trade for the American Apparel and Footwear Association."

Read more at Philly.com
at November 18, 2013 No comments: Links to this post

fight for your long weekend. . .

. . . and have a peaceful one regardless.

I hope to see everyone around the holidays, if not sooner.
at November 15, 2013 No comments: Links to this post 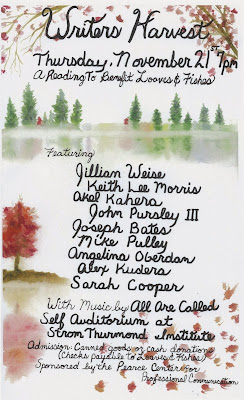 I'll be presenting Fight for Your Long Day in Washington D.C. on Sunday November 17 at 10:30 a.m. as part of the SEIU Local 500 Conference on the crisis in higher education.
And then, back in Clemson the following Thursday at 7 p.m., I'll be reading as part of Loaves and Fishes Writers' Harvest.

Will the newest addition to the Clemson family bring canned goods to support hungry children in the Upstate?

(Please ignore our comma splices, missing apostrophes, and other tie-poe's if you happen to peruse our welcoming comments. Go Tigers!)

"Thirty years ago, there was a 31 percentage point difference between the share of prosperous and poor Americans who earned bachelor’s degrees, according to Martha J. Bailey and Susan M. Dynarski of the University of Michigan. Now the gap is 45 points."
at November 13, 2013 No comments: Links to this post

According to a metric tracked by Gallup since 2011, less than 44 percent of American adults have a full-time job. Although it will always be a goal to increase this percentage, to encourage employers to understand why the stability of full-time work benefits both worker and company, it's also beholden on all of us teaching career-prep college courses to make students aware of this and teach strategies for navigating the world of contingent or permanent part-time employment.

Meanwhile, CNN just "broke the news" that the "U.S. economy added 204,000 jobs in October, more than analysts expected. Unemployment rate rose to 7.3% from 7.2%." Such substantial job gains coupled with a rise in the unemployment rate indicates that there are many more millions of people who'd gladly work were there opportunity to do so.

And here's another piece that includes charts to confirm, once again, that it is a bad time for younger workers in America.
at November 08, 2013 No comments: Links to this post

So, as best I understand it, these figures do not include people whose work is not construed as work. Those who aren't counted would include stay-at-home spouses; graduate students with teaching and research assistantships; everyone who lives off income from social security, stock dividends, or bank interest; and so on.

An interesting statistic is that 40 percent of all workers earn less than $20,000, and you don't have to live in New York City or pay a student loan or heating bill to know that living on less than twenty grand a year, before taxes and other deductions, is challenging. When adjusted for inflation, the median worker's income is down $4 from 2011 and at its lowest since 1998.
at November 06, 2013 No comments: Links to this post

At a time when many lower-income Americans are feeling the pinch, Mike Pulley's Writers' Harvest returns to Clemson University on Thursday, November 21 at 7 p.m. This will be my third year reading at this canned-goods benefit for hungry children in the Upstate, and it feels like our percentage of food-insecure citizens is on the rise. Or maybe it just always feels this way as the cold season approaches. . . I knew a bit about holiday poverty as a child although I have no recollection of ever feeling hungry or "poor" in any permanent sense of the word.

Dan Cafaro slapped down more of his mouth where his money is, and added a nice post on adjunct advocacy with relevant links to the Atticus Books blog. Many, if not most, Atticus titles focus on how the less secure American working person navigates the arduous task of surviving in our "culture of late capitalism," "neoliberal economy," or whatever else you'd prefer to call it. His latest publication, a novel in stories called Sidewalk Dancing, appears to have an intriguing multi-ethnic, transnational premise.
at November 03, 2013 No comments: Links to this post

Beyond academia, it's in the news, too, and increasingly common among millennials. (I've no statistics on how the writers of all the latter hyperlink's articles were paid, if in fact it was by "exposure," cold hard direct deposit, or any other means.)

In a post on Dan Fante's Point Doom, I mentioned being the same age as the narrator, and now it's as if my age is chasing me around the web. Recent findings?

The prison guard featured in a story about the most unequal place in America is 44. He works a night shift in Louisiana for $8.50 an hour.

The guy who learns the vast comic collection he has saved since childhood is worth about $500 is also 44, and now he has to find alternative funding to pay for his kids' college educations.

And the suspect in the Anderson Hall assault on an adjunct is 45.

So, to an extent, it's my age, even in food stamps lost, that's hitting me over the head on this first of November, and it doesn't feel like a good time to be a mid-forties male in America.

I better write fiction quickly from now on. . .

(Returning to this on February 3, 2014, and 1) from a student essay on a magazine advertisement I learned Jennifer Aniston is 44 2) newly crowned Poet Laureate of Philadelphia, Frank Sherlock is 44! and, alas, 3) we've lost a great actor who was 46.)