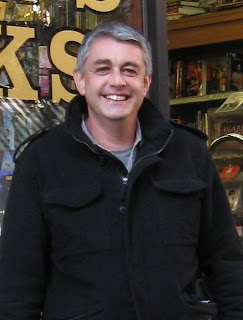 Iain Levison's Dog Eats Dog was published in October, 2008 by Bitter Lemon Press and his even newer novel How to Rob an Armored Car will be published by Soho Press in October, 2009. Back in '00 or so, L.U.S.K. first discovered Levison's A Working Stiff's Manifesto in hardcover with its original subtitle, "Confessions of a Wage Slave." That memoir established Levison's scalding wit and ability to hold the attention of an ever-tweeting audience. It was later released as a trade paperback with a supercharged second subtitle, and Levison has managed to survive, publish, and publish again. With long-terms roots in Scotland and Philadelphia, Levison currently resides in Raleigh, North Carolina where he commits literature and carpentry as much as he can.

USK: When did you first know you wanted to be a writer and when did you first identify as a writer?
IL: Writing is the only thing I've ever been any good at. Well, the only legal thing. Early on, I realized that I was never going to get any money or glory pursuing athletics or music, so if I wanted a career where I could earn a decent living without having to kiss anyone's ass, it was writing or crime.

USK: How do you balance your working life and your writing life?
IL: I go to work and then come home and write. That's really all there is to it. I work as a carpenter and maintenance man, so I don't really have to use my mind much at work. I can just think about things to write about all day.

USK: When I heard you read at the downtown Philadelphia Barnes and Noble, you mentioned Disney (or another company) was considering turning Working Stiff's Manifesto into a TV show but that you were still waiting tables on the mainline? Could you update us on what happened to you since then? I believe this was after the paperback edition of Working Stiff's was published and before the hardcover of Since The Layoffs.
IL: Wow, that was a while ago. Since then, various companies have bought film and tv options on all my books, then the rights have expired, and then someone else has bought them. Right now, it looks like Since the Layoffs might actually be a film soon. We have the funding, it's just finding people and getting organized. Sony currently has the TV rights for Working Stiff, but I haven't heard anything, so it's possible the rights will just expire without anything being produced, which is usually what happens.

USK: Since The Layoffs deals with the serious issue of alienated, disgruntled, and fired workers venting their anger by murdering people. Does it scare you that this topic seems to have become part of the national news each month?
IL: To be honest, in a country with no gun control and no respect for workers, you'd expect it to happen more often. But the people who keep going nuts with firearms seem to have a lot of misdirected animosity. They always kill innocent strangers minding their own business. They're just attention whores. We could put a stop to that fairly quickly by making a law (which has been introduced in Congress) that made it illegal for the media to cover a mass shooting outside the immediately affected area. These idiots aren't going to go to jail for the rest of their lives if no one outside rural Arkansas ever gets to hear their name.

USK: What are you doing to avoid swine flu? Do you feel such misrepresentation of said flu is an attack upon all pigs, Porky alone, or Miss Piggy and pig lovers?


IL: The Aporkalypse is upon us! Run for your lives!
We are becoming a feeble-minded population. Flu, for crying out loud. Flu! When are people going to remember that EVERYTHING they see in the media is put there to support corporate advertising? That's why you can see a week's worth of fake panic about flu, without a single mention of investigating or cleaning up factory hog farms. Con Agra and Archer Daniels Midland and other huge companies own the farms, and they lay out billions in advertising. So the reporters have to do this weird gymnastics, trying to freak everyone out about a fake epidemic while simultaneously acting like having 30,000 animals wallowing in their own feces couldn't possibly be the cause.


USK: What is your advice to fledgling writers?
IL: Learn how to take rejection. Other than writing, it will be your most used skill.


USK: How can we access your writing?
IL: In a bookstore, I hope. I don't have much of a web presence right now. I haven't decided whether to get my site up and running again; it's a lot of work, and I'm very busy at the moment.

For more information on Iain Levison's work, follow this link.

*update: Iain's latest novel was a bestseller in France and is due to be made into a film.

Great interview - thrilled to see Iain has a new book coming out. I'm actually re-reading Manifesto for about the 4th time and did a Google search to see what he's been up to. Can't wait to pick up the new one...

Hey Iain...its me Chad. Anyway, I can see you are at least somewhat famous now, so you probably do not have time for me anymore lol. However, if you do find a sec, please send me a contact # where you can be reached at, I would love to hear from you and possibly meet up for a spot of tea and maybe some Cadbury bars we can find on the top of your fridge!!...email is cmoll300@aol.com

Iain!! Ron Cook! Jim Connell and I just reconnected and are both trying to find you. Saw your books on Amazon, so I'll be reading your work shortly! Surely you must have mentioned Gullifty's in your manifesto. Last I heard you were down here in NC, according to the article, you still are. Thought of you since moving down here also...I'm over by Asheville now. Hope you find this, get in touch at Mayo703@aol.com. PS Jim says you are his hero : ) Those were good times (somehow) at Hellhole's, I mean Gullifty's.

I ve jsut read a Working stiff s manifesto in ONE GO Its THAT good
do you two commenters worked with this guy then? Wow!I know of few other writers like that sauf Jim Thompson and B Traven and am now totally addicted to his work,I wonder what he thinks about pirating books, probably not much It kind of means writers are just as fecked up by the public as the workers in the corporate world doesn t it? On the other hand...